When in the past days I read about Parker’s prediction, a very well known personality in the international wine world, and the subsequent post on “Intravino“, I felt myself deeply  involved in this argument.

Talking about it with Lorenzo, I confessed my continuous disappointment for the lack of respect towards a world which, in most cases is made of commitment, ideals and sacrifice. It is a rather fruitless debate that often lights up, raising doubts and negative opinions over ” natural wine”.

Lorenzo, in his deep and quiet wisdom, has been able to remind me our position in this world and the value it has for all of us, non only for the producers, not only for those who love wine.

I asked him to write those words that I immediately wished to share with Luciano Ferraro, who has been following the Maliosa project for some time. 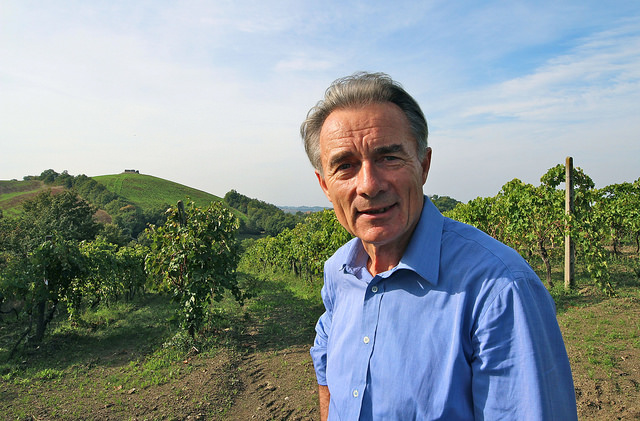 Lorenzo Corino in the old vineyard at Fattoria La Maliosa. In the Background the Monte Cavallo

“On January 2nd Robert Parker, the world’s most influential wine reviewer, posted on Twitter his 15 forecasts for the new year that just started.

On point 3 he wrote: ” The undefined scam called ‘natural’ or ‘authentic’ wines will be exposed as a fraud- ( most serious wines have no additives)”.

A statement that has generated a debate in Italy as well. We host Lorenzo Corino’s  intervention, a pioneer of sustainability in italian viticulture, who manages and supervises the biodynamics  and the viticoltural project at the Maliosa farm owned by Antonella Manuli in Manciano (Grosseto).

In my opinion, the statement about natural wine in Parker’s prediction doesn’t deal in any way with  the essence of the topic that I’ll try to develop here.

Grape production is made possible in Europe and around the world by an important use of agrochemicals , water, mechanization, “expenditure” of the soils’ vitality.

All that shouldn’t have to do with the  production of a natural wine. These habits have also caused negative consequences on the health of the vineyard workers, as some medical statistics confirm. For some time, and not only for the wine, an economic need emerged to produce  in a better way and with more “natural” methods, in order to obtain safer and healthier agricultural products. Health of the production locations, of their inhabitants, of those who work there, of customers are  foundamental requirements the modern vineyard doesn’t respect enough, forgetting the huge sanitary cost.

The commitment to produce a natural wine should get the maximum agronomic attention together with an intelligent and conscious use of the enviromental, coltural, and soil heritage. Through biological soil quality (BSQ) checking, it will be possible to choose the coltural technique and the vine variety from which the best result can be obtained in complete harmony. It is, so, widely demonstrated that natural wine can be made only in suited enviroments for the  vine, with a minimum use of agrochemicals joined to natural adjuvants free of secondary unexpected effects.

Considered that the wine legislation in the world allows a series of numerous technological and chemical applications, the production of natural wines should  leave aside all of these techniques. And, in case it weren’t completely possible (eg. solforous), this must be declared. We should strongly priviledge the territorial origin, the vines, the commitment to well consider the risks lavished for the wine uniqueness and goodness.

Natural wines are a necessary answer to important anomalies in the wine production. The achivement of different qualities, as well as for the conventional wines, resides after all in the producer professionalism.

It seems to me that Parker was born, like me, in 1947; I’d like to share with him a bottle of natural Barbera wine, produced in that year by my father.